I thought that, given our emphasis on pedagogy, it was interesting to watch this (very staged) short clip of Stanislavsky teaching.  Is this even real?  I do not know.

Augusto Boal’s ideas have informed my work as a performer and researcher of Theater. His well-known Theater of the Oppressed is what has caught the attention of theater scholars and directors the most around the globe. However, I am both interested in the Oppressed and his theater experimentations before it in 1960s-1970s  dictatorial Brazil. Here a video to learn more about his work (there are a lot more videos and stuff written on him in Portuguese, in case you’re familiar with the language too):

Since we are reading Stanislavski for the next few weeks and thinking about what it means to live in a part, I thought I would let everyone know that the Maly Theater of Saint Petersburg is bringing a production of the Chekhov’s The Cherry Orchard to BAM in Brooklyn from Feb 17—Feb 27. The company’s director, Lev Dodin, studied with one of Stanislavski’s pupils at the Leningrad Institute of Theater, and his work is very much in line with the methods we are reading about in An Actor Prepares.

I had the privilege of seeing one of the Maly Theater’s Chekhov productions some years ago and it was hands down one of the greatest theatrical experiences of my life. If you want to know what the “blooming of the subconscious” looks like on stage, then take a train to New York to see these guys.

The play is in Russian with sub-titles.

Une leçon de Pierre Boulez
This is an example of a lecture recital that the recently deceased composer Pierre Boulez gave to a lay audience about the work “Sur Incises” (1996-98). The lecture recital is part of documentary on Boulez and thus a highly produced “lesson”, but I think it portrays an interesting example of the genre of the lecture recital (a more well-known example might be Leonard Bernstein’s filmed lecture series with the New York Philharmonic, the “Young People’s Concerts), particularly in its illustration of the effectiveness of the medium in the realm of contemporary music. Particular attention should be given to the dramatic structure of the lecture, as well as the cinematography, which is used to make audible what at first seems impenetrably complex. 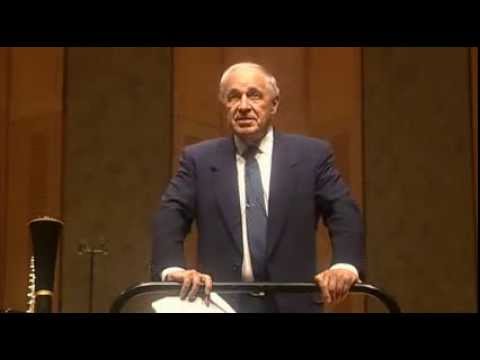 Naturalist, explorer, writer, philosopher, polymath… Friedrich Wilhelm Heinrich Alexander von Humboldt (1769-1859) gave over 70 lectures in Berlin starting in the fall of 1871. They were a public sensation, with hundreds attending of all type and class. There was traffic in the streets as people rushed to the lectures (performances?) to the crowded auditoriums. He “took his audience on a journey through the heavens and deep seas, across the earth, up the highest mountains and then back to a tiny fleck of moss on a rock” (Wulf, 194). Further, “Newspapers reported how Humboldt’s ‘new method’ of lecturing and thinking surprised the audience with the way that it connected seemingly disparate disciplines and facts” (196). I have been fascinated by Humboldt’s approach to science and pedagogy since reading the preface to his opus Cosmos. More recently, I read about his lectures in Andrea Wulf’s new book The Invention of Nature: Alexander von Humboldt’s New World (2015). I would like to consider his lectures, style, reception, presentation of science.

Check out Humboldt’s lecture prep notes. He apparently did not read anything while presenting. (Image from Wulf, 195.)

“In front of an audience comprising mainly women artists, Schneemann approached a long table under two dimmed spotlights dressed and carrying two sheets. She undressed, wrapped herself in a sheet and climbed on the table. After telling the audience she would read from her book, Cezanne, She Was A Great Painter (published 1976), she dropped the sheet, retaining an apron, and applied strokes of dark paint on her face and body. Holding the book in one hand, she then read from it while adopting a series of ‘life model “action poses”’ (Schneemann in More Than Meat Joy, p.235). She then removed the apron and slowly drew a narrow scroll of paper from her vagina, reading aloud from it.”

Anne Carson is a poet, a teacher, a literary critic, a performer, and sometimes all of these simultaneously. I believe she demonstrates well an embodied enactment of discourse. Here is a clip of Anne Carson reading a “lecture” which is in the form of a poem, which is presented as a kind of absurdist play alongside an interpretive dance routine.